The Work of the Hospital of the Ocean 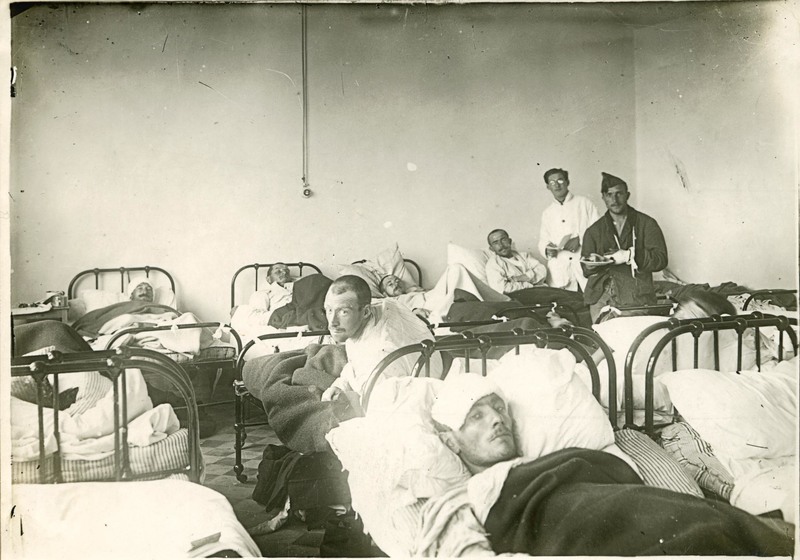 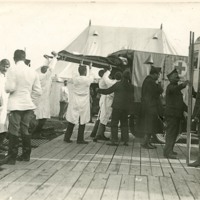 Evacuation of a casualty 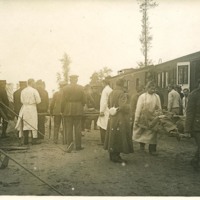 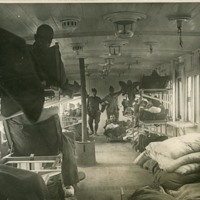 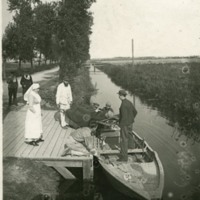 Transporting the wounded from an advanced outpost

La Panne was 18 km from the front. Not near enough for the most seriously wounded, in severe haemorrhage, with stomach wounds and in shock (a blood-pressure drop which threatened the vital organs). They were brought, through networks of trenches, and then by bad roads or motorboat, to three surgical outposts. The Oostekerke outpost was 3 km from the front. Five trucks served those tents. They housed an operating room, pharmacy and a sterilizer for surgical instruments, a linen room and bunks for the medical personnel. The tents accommodated fourteen beds. The outpost unit was heated and electrified by a generator and accumulators.

AtLa Panne itself, several operating rooms received the surgical emergencies. A radiology unit (a discipline of recent date, begun in 1896) supported them. Then, or immediately, the wounded were sent to the specialised services: stomatology (fractured jaws and broken mouths), joint wounds, wounds of the neck, of the nerves, fractured limbs, ophthalmology, rehabilitation…

Its proximity to the front, its organization and its innovative methods were the best instruments the Ocean had. One of its worst enemies was infection - at a time when antibiotics were unknown. But, in reality, industrial warfare multiplied the disasters.

The soldiers' lives were horrendous. The ceaseless shooting and offensives decimated them. Powerless, they witnessed death and suffering, lay next to cadavers and put up with rats, lice, cold, rain and unspeakable filth. The diseases alone wreaked havoc. There were three terrors: faces torn off, dislocation by shells and gas attacks. Due to the very nature of trench warfare, the soldiers' heads were particularly vulnerable. The 14-18 war saw the emergence of major facial traumas, those who came to be called "les gueules cassées" (the broken faces). For those innumerable victims, to lose your face is to lose your sight, sense of smell, hearing and taste, to no longer be able to feed yourself, but also, and perhaps above all, to lose your self image vis-à-vis loved ones, i.e. your very personality.

At a shell's point of impact, myriad sharp edged shrapnel lacerate organisms. Add to that the force of the blast casting bodies and debris, without counting the risks of being buried. The experience of endlessly repeated artillery preparations turned men into hunted animals, in fear of the Russian roulette a bombardment amounted to. The poison gases developed by both camps were first used in Belgium in April 1915. The July 1917 introduction of blistering agents which attacked the skin directly, even through uniforms, was just a step further into the horror.

Infection destroys the body's defences and leads to gangrene. Getting closer to the front is the first line of defence, but it is not enough in dealing with complex and contaminated wounds. The known disinfectants brought few results and caused new damage. Antoine Depage implemented the Carrel-Dakin method at La Panne,which consisted in irrigating the wounds with a hypochlorite solution. The operations were delicate and the laboratory, bacteriological evolution had to be monitored. But results made the efforts worthwhile.

The Hospital of the Ocean prefigured major university structures of today. It was multidisciplinary and multi-competence. It was academic. The wounds and their treatment were documented, analysed and discussed. The results were published and presented at International Conferences. It was, moreover, already globalized.