Georges Lemaître and digital calculation: an interest in expansion… 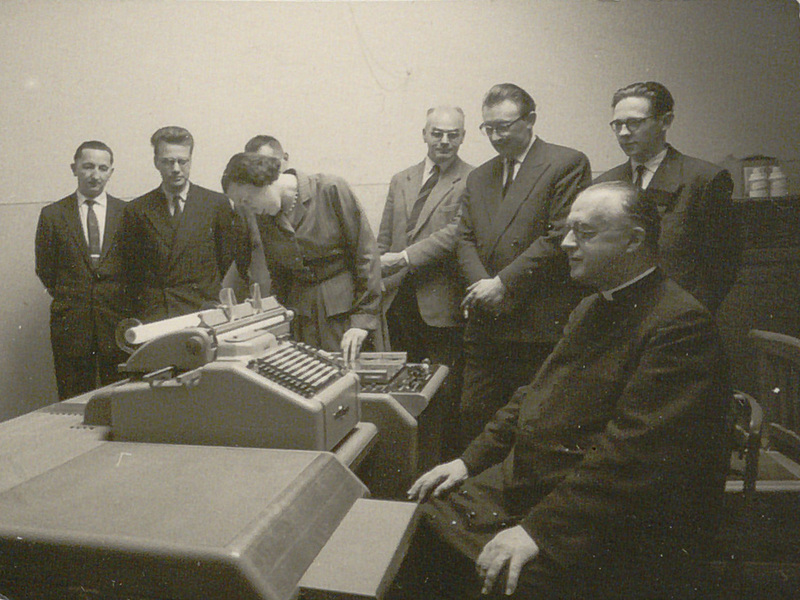 Georges Lemaître during a demonstration of the Burroughs E101, at the Digital Research Laboratory of the Catholic University of Louvain, in May 1959.

Data processing and computers are tools we deal with on a daily basis. Today, most computing apparatuses are small enough to go into our pockets and simple enough to use to be accessible to everyone. But we too often forget that that result is the fruit of an evolution which began over a century ago.

Throughout the 20th century, the digital field developed in conjunction with the growing need to do increasingly complex calculations. Scientists needed ever more powerful machines to follow the progress of their disciplines and help them in their research work.

Georges Lemaître, seen today as one of the most prominent researchers of the 20th century, was no exception to the rule. Known mainly for his work in cosmology on the Universe's beginning, the theory of the expanding universe and the foundations of modern cosmology with a quantum space-time origin, the Belgian scientist was also distinguished in other fields linked to digital calculation and the use of calculating machines.  Thanks in particular to the customized use he made of the machines, Lemaître could go further than his predecessors  in digitally studying new solutions to the equations of general relativity, the cosmic ray theory, and models of the formation of galaxies and their clusters.

Even if the use of calculating machines, ever more powerful in the course of time, was above all a means allowing Georges Lemaître to work more effectively, he also took great pleasure in handling them.   His curiosity as to how the machines functioned enabled him to handle them skilfully in order to best exploit their potential.   Thus, Lemaître was not just a pioneer in the scientific disciplines, but also in the data processing and programming domains..

← … seen by his students
Between pragmatism and curiosity →
Georges Lemaître and digital calculation: an interest in expansion…