… seen by his students 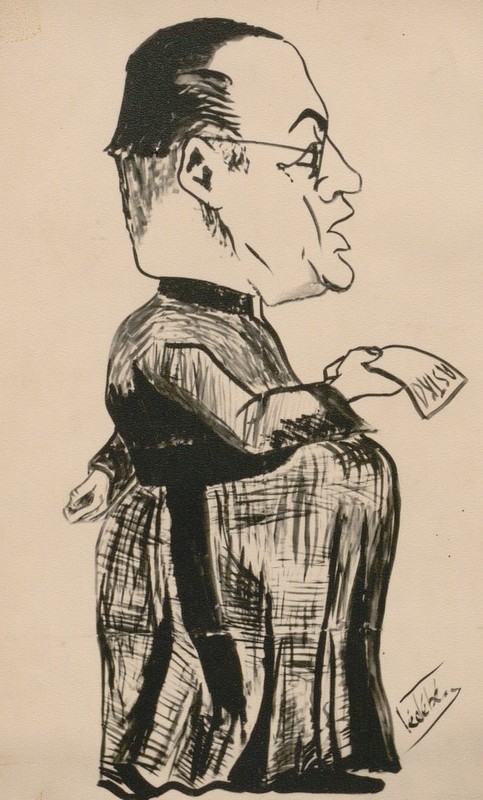 A caricature of Georges Lemaître in the programme of the Review of Engineers, 1949. Georges Lemaître was a favourite target of the student's jokes - for they knew their professor's sense of humour.

Lemaître created a special relationship with his students, far from the image of an inaccessible professor. André Deprit, a former student of Lemaître, who was to become one of his close collaborators, explained that his principle “was not to bother the average students and to notice and help the more promising among them in advancing, with whom he would become much more demanding in the licence/master's phase.”

Lemaître's examinations were rather illustrative of this principle; he proposed that the students evaluate themselves as to their level, and depending on the answer, he would asked him/her more or less complicated questions. Thus, it was hard to fail one of his examinations, but also hard to get more than a fourteen out of twenty, as this extract from a student song proves so well:

"Sun shone on the building roof,

In the courtyard, a dozen students

sweated away at work.

A guy just came out of Lemaître's office

He just passed without knowing a thing"

Students greatly appreciated Lemaître for his humanity and accessible side. As professor he was often the target of their reviews, but he never held it against them. He was often caricatured as a 'bon vivant' and his teaching style was the subject of many jokes. Yet the students also described Lemaître as a kind and warm person.

Here is an extract from Odon Godart's talk at the Carolo (Regional association of students from the Charleroi area) in 1934; it is quite laudatory :

" Our 'relativist' scientist is not only a Master but a comrade, just as young at heart as we are. He's retained that youthful spirit of the Walloon student, loving to joke and laugh, always looking on the bright side, enjoying himself or working with the same verve, in the same good mood. He is one of the rare professors who's kept up a real contact with his students, understanding them and striving - depending on theirdesires - to make up for the lacks that exist in our university life, focussing his activity with such grace and good nature that he's won over everyone he's met. And that's why tonight I join you in applauding...” 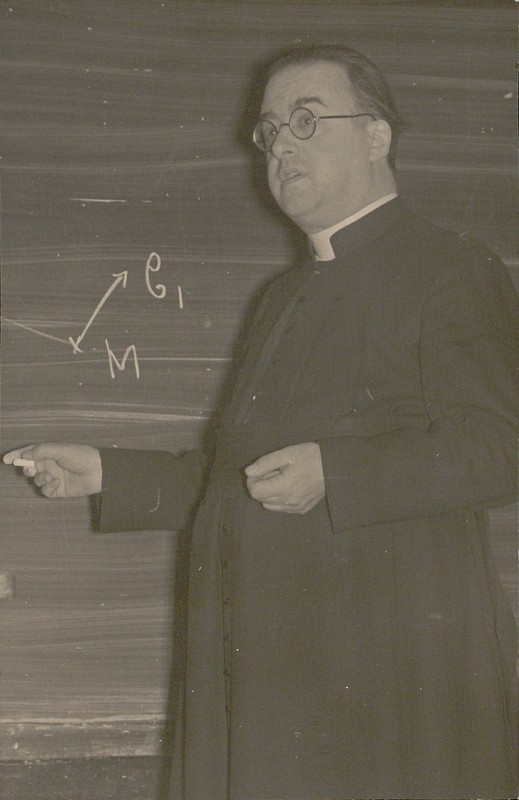 Georges Lemaître during a course of mechanics, November 1949. Lemaître was aware of the importance of his role as a teacher. During the war, he did not give up teaching and modified his schedules to best accommodate students confronted with the Occupation.

Lemaître is described there as a bon vivant, friendly, kind and always there for his students. Another testimony, from a former law student, Amaury de la Chevalerie, attests to that character trait. One day when that student was reading Eddington's work on relativity on the train between Louvain and Brussels, Lemaître came into his compartment and sat down beside him. Lemaître, who had noticed what he was reading asked him whether he was a science student. He answered that he studied law, but was interested in astrophysics, but that he had - just the same - certain scientific lacunae and that it was sometimes complicated and hard for him to understand everything in the book. Georges Lemaître, abounding in kindness, got the idea of explaining the theory of relativity to him. Thus every time the two ran into one another on the Louvain-Brussels train, the professor explained relativity to the law student.

“Well, the Abbé said, I'm Georges Lemaître and since we take the same train, I'm going to explain Einstein's Relativity to you”

During the War and German Occupation, Lemaître once again showed his altruism. Remaining in Belgium, he went on teaching at the Catholic University of Louvain. Aware of the difficult circumstances, the professor adapted his schedules and proved to be particularly lenient with the students. Having installed the University's calculating machines in his apartment for fear the Germans might requisition them, he authorized the students to go to his home to use them, even in his absence. Students of the Free University of Brussels (ULB/VUB) who were enrolled at Louvain once the Germans closed their own university also experienced Lemaître's kindness, intervening to ask the rector to exempt them from religion courses at Louvain, out of respect for their convictions. 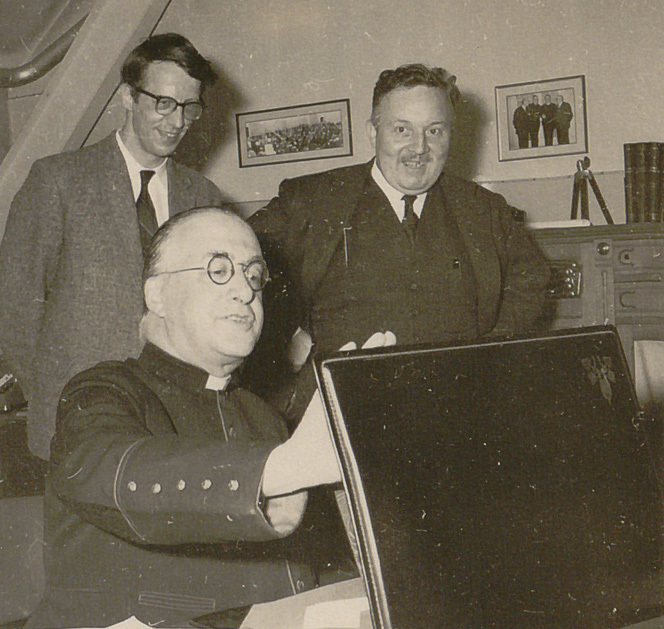 Georges Lemaître, André Deprit (left) and Odon Godart (right). These former students of Lemaître became his collaborators and in fact close friends. Here Lemaître examines the gift (a secretaire with the pontifical arms) offered to him by his friends upon being named President of the Pontifical Academy of Sciences. 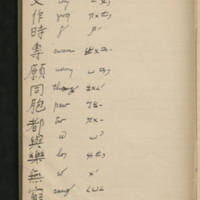 An extract from Lemaître's notebook. We see the Chinese characters sketched out. 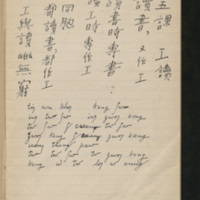 Lemaître learned the language to facilitate the integration of Chinese students into the University.

But Lemaître didn't just do things for Belgian students; he was also sensitive to the problems of foreign students. Particularly close to Chinese students enrolled at Louvain, he took an active part in their reception in collaboration with the P. Vincent Lebbe, Abbé Boland and Dom Théodore Nève, the Abbot of Saint Andrew's in Bruges. In his personal documents, we find index cards, all containing biographical information. Having begun to learn Chinese in the seminary between 1920 and 1923, in 1929 and 1930 he oversaw founding the first house for Chinese students in Louvain. A member of the “Sino-Belgian inter-University Committee”, he also dealt with setting up an academic committee for Chinese students at Louvain in the early 1950s. Tchang Yong Li, a former doctoral student of Lemaître from China, became his friend and accompanied him in his work during the thirties.

Quite often Lemaître developed particular ties with some of his students, for example Odon Godart and André Deprit. They both became his assistants - and friends too. Godart subsequently took over his course of Spherical Astronomy and Mathematics afterthe war, whereas André Deprit succeeded him in his Mechanics course.

As his doctoral student, Godart explains that if time allowed, Lemaître preferred to take a walk in the park rather than correct and discuss his work. The two friends always finished their walk by dropping in at the Debelva pastry shop (located on the former Foch Place). 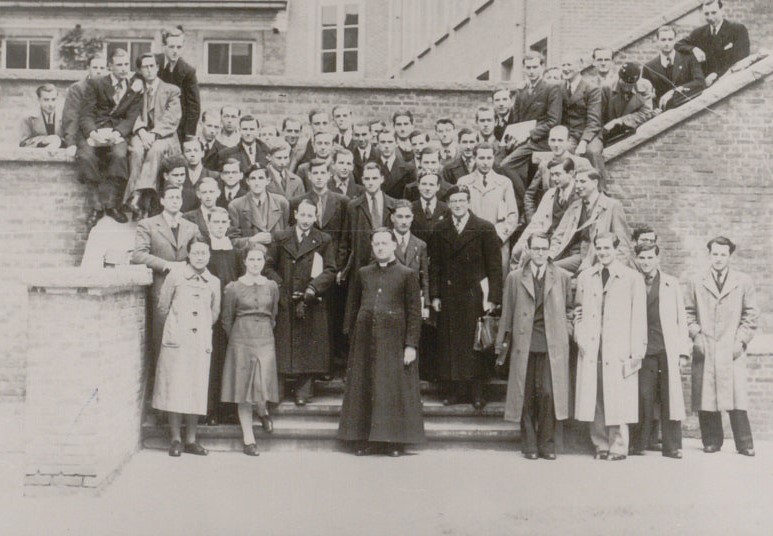 Georges Lemaître, at the centre, surrounded by students. The professor was close to his students and tried to create a real relationship with them.

← The professor…
Georges Lemaître and digital calculation: an interest in expansion… →
Certain peculiarities of Professor Lemaître
… seen by his students