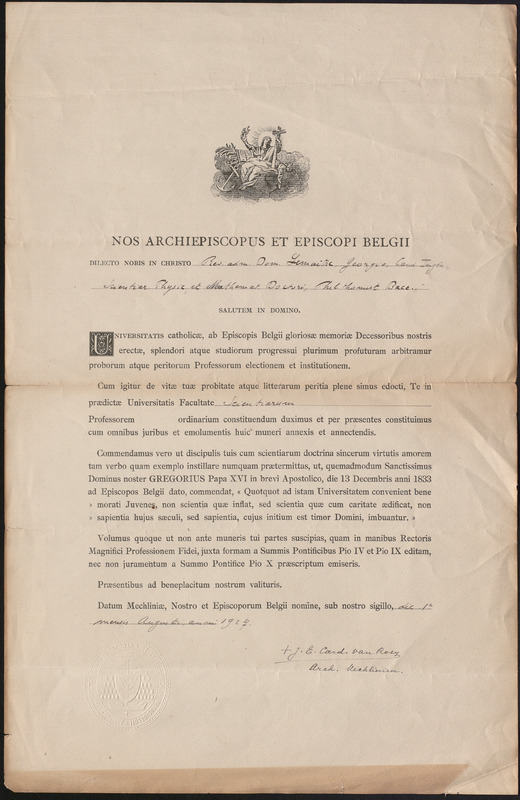 Letter of nomination of Georges Lemaître as a Full Professor at the Catholic University of Louvain, dated August 1st, 1927.

July 1925 marked the beginning of Georges Lemaître's professorial and academic career. Just back from the United States, where he had collected all the data that would enable him to advance his theory of the expanding universe, Lemaître was appointed part-time lecturer at the University of Louvain. He was assigned to teach the course “History and methodology of mathematics"  and thus succeeded he who had been the promoter of his doctorate in mathematics and physics, Professor Charles de la Vallée Poussin. Georges Lemaître also became the first professor to teach the new course “Relativity”. In October 1927, a few months after the appearance of his famous, foundational article “A homogeneous universe of constant mass and increasing radius accounting for the radial velocity of galactic nebulae” in which he explained his thesis of the expanding Universe, he was named Full Professor at the Catholic University of Louvain.

Thereupon his teaching loads became heavier. On the death of Maurice Alliaume in 1932, he took on the courses “Spherical and mathematical astronomy” and “Probabilities and theory of observational errors”. Six years later, he also began teaching the course on “Mechanics”. The Occupation too was not bereft of consequences. He taught the course “Philosophy and religion”, substituting for Monseigneur De Strijker, unavailable because of the war. Lastly, technological advances and his predispositions for using calculating machines led him to give a course “Programming in ALGOL” (a data-processing language) at the very end of his career, shortly before he became emeritus in July 1964.

A head in stars 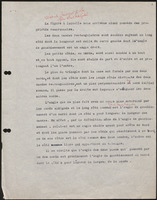 Lemaître nevertheless prepared some of his courses. The photographs above show some preparatory notes for his course on cosmology.

On the first page, we can even see the reminder “rewrite until the end of the chapter”, proof that Lemaître did not completely forsake his courses.

Even if he did not teach all of those courses throughout his academic career as professor (By 1962, he no longer taught the courses on Relativity, Mechanics, or the 'History and methodology of mathematics', Lemaître was nevertheless very busy with his teaching mission. But that too did not prevent him from continuing to travel and attend congresses abroad, as, for example, in the United States in 1932-1933. He also spent long periods in other university institutions, as in 1938 when, from February to June of that year, he taught as an invited professor at Notre Dame University in Indianaas well as at the University of Chicago.

His trips, as well as his absent-minded and disordered character, prevented him from thoroughly preparing his courses. One day, whereas he was supposed to show slides in the context of his Astronomy course, the eminent Belgian cosmologist picked the wrong series and projected photos of his trips. Without being unnerved in the slightest, Lemaître thereupon gave a talk on the importance of international meetings in research work.

" What's wrong with you people today, are you all sick? I can't teach like this !" 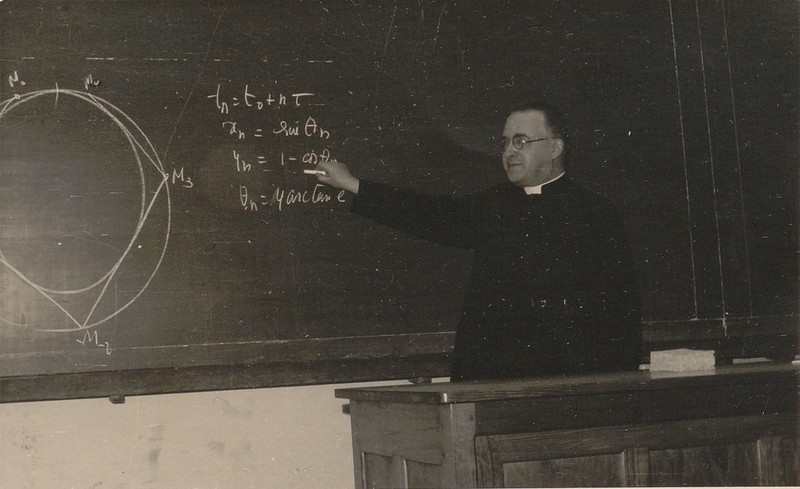 Georges Lemaître during a course in 1956. The professor greatly appreciated the students' active participation.

The Belgian scientist didn't care for traditional teaching methods either, usually corresponding to making a synthesis of the subject matter. He preferred to proceed via problem-solving; it was up to the students to draw the conclusions. While he was at the board, busy solving a problem, Odon Godart, one of his former students remembers the students' chatting and lack of attention. But that by no means irritated Lemaître, someone who liked to work with background noise. Once, André Deprit, another of his former students, recalls, the students signalled to one another to quiet down; a few minutes after the course began, unable to put up with the silence, the eminent professor broke out: “What's wrong with you people today, are you all sick? I can't teach like this!” and the noise took off at once.

Despite his love and respect for his function as a teacher, it often happened that Lemaître was often absent-minded and forgot the hours of his courses and even of the exams. A student explained that once he had to present an oral examination with him, and Lemaître was late; the professor had forgotten the test. When he got to his office, a line of students awaited him. Taken aback and obviously forced to recognize his mistake, he gave everyone a thirteen (out of twenty)/a 'B', without asking anyone a single question.

"Dear Sirs, I have no intention of teaching today !"

Here is how the recording below containing the last minutes of Georges Lemaître's last course of the year 1959 begins. We hear the professor explain the rather singular way in which his exams would take place. This recording is a good example of the general atmosphere in a course given by Professor Georges Lemaître.