… and his research work 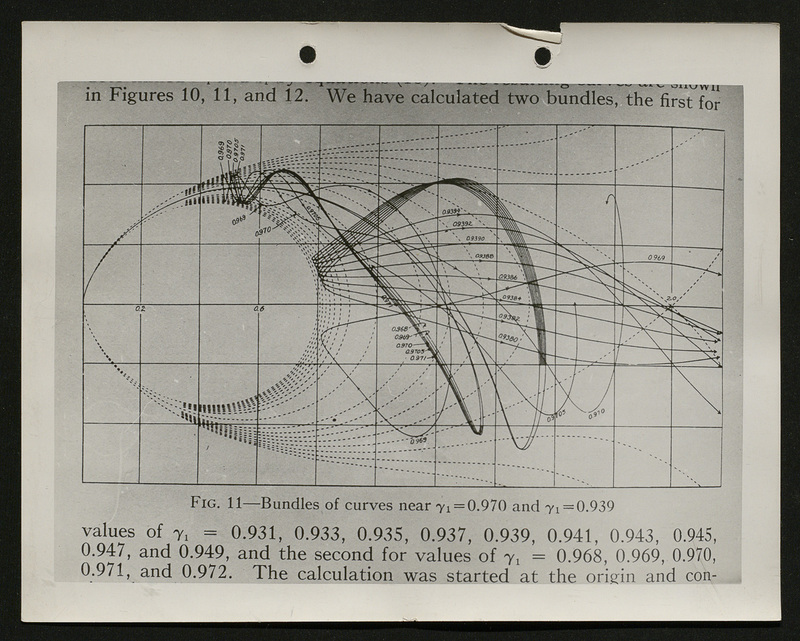 This diagram, derived from Lemaître and Vallarta's results, represents the trajectory of charged particles in interaction with the terrestrial magnetosphere. The particles are reoriented towards the Earth's two magnetic poles, at the extreme left of the graph. 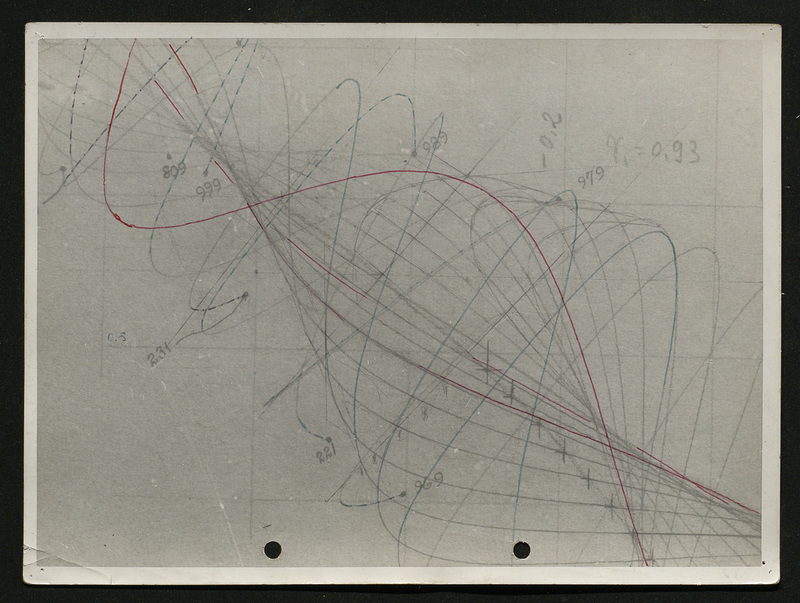 This diagram represents the asymptotic trajectories of charged particles in contact with the magnetosphere. Lemaître calculated these trajectories for better evaluating the total intensity of particles.

The first topic Georges Lemaître was to confront in using the machines was that of cosmic rays. When he formulated his hypothesis on the beginning of the Universe in 1931, Lemaître envisaged the existence of a fossil radiation resulting from the explosion of a primitive atom. Made up of highly energetically charged particles, that radiation would still be perceptible today. He thought the fossil radiation envisaged in his theory corresponded to cosmic rays, the flows of charged particles discovered in 1912 and whose origin was still unknown. Lemaître thereupon concentrated his future work on studying those cosmic rays.

He was not the first scientist to be interested in the phenomenon. The Norwegian Carl Störmer had studied the trajectories of charged particles in interaction with the Earth's magnetic field in the context of his research work on the northern lights. Lemaître and his colleague Manuel Vallarta used Störmer's works to calculate the trajectories of cosmic rays, they too composed of charged particles, and to determine their behaviour in contact with the terrestrial magnetosphere in a more precise manner.

In their joint works, Lemaître and Vallarta concluded that the charged particles approaching the Earth are subject to the magnetosphere's influence. That prevents the particles reaching the Earth between certain latitudes (close to the Equator). On the other hand, the more one approaches the magnetic poles, the more particles reach the Earth. The cosmic rays' intensity is thus greater at the magnetic poles. The two scientists thus confirmed the effect of latitude already observed by other researchers. Moreover, their research work introduced a new effect into the behaviour of charged particles . They noticed that if the particles are positively charged, their intensity will be larger towards the West. Inversely, if they are negative, the intensity will be greater in the East: referred to as “the East-West effect”.

If Lemaître and Vallarta managed to improve the framework implemented by Carl Störmer for calculating the trajectory of particles it was in great part due to the means at their disposal. When they started working on the subject in the early 1930s, they were both at M.I.T and had a major advantage there, using a machine allowing them to integrate and solve systems of ordinary differential equations and which was capable of representing the solutions graphically. That machine was Bush's Differential Analyzer, built in 1931.

"If Lemaître and Vallarta managed to further research work on the trajectories of charged particles, it was in great part due their use of the Differential Analyzer"

The behaviour of galaxies 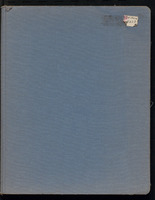 On this page of notes, Lemaître refers to a “coding problem” he has solved.

Lemaître's research work underwent a reorientation after World War Two. His studies on models of the Universe took second place. His readings during the Occupation had awaked his interest in the formation and structure of galaxies. In the 1930s, he had thought that the galaxies created themselves by a uniform distribution of stars in the Universe. After the War, thanks to his readings in celestial mechanics, Lemaître's point of view changed radically and he came to see the galaxies' formation as due to the production of gas clouds of massive particles moved at high speeds during the disintegration of the primitive atom. Once the radius of the Universe had become virtually stable (as Lemaître predicted in his model of the hesitant Universe), those clouds condensed into one another. That phenomenon marked the beginning of the formation of galaxies.

An example of calculations on galaxy clusters with the Burroughs E101. The calculations and results are only comprehensible to those who are perfectly familiar with the machine's operation.

Lemaître furthered his analysis of the galaxies and became interested in their evolution and formation in clusters. He sought to show that the galaxy clusters are dissipated from their edges and interact with other nearby clusters. He also tried to calculate the behaviour of galaxies when the Universe resumes its expansion (the third phase of Lemaître's Universe). He wanted to determine whether the galaxy clusters come apart or remain welded despite the phenomenon of expansion.

Even if he did not manage to predict the behaviour of clusters during the resumption of the Universe's expansion and even if the idea that galaxy clusters interact with one another to avoid their disintegration proved to be false, Lemaître's research work on the formation of galaxies via variations in densities of matter causing the condensations of clouds is still very much taken into consideration.

The calculations for determining the behaviour of galaxies and galaxy clusters are quite complex, and there too, Lemaître had to rely on ever more sophisticated machines. In particular, he used the Burroughs E-101, installed in Louvain in 1958. 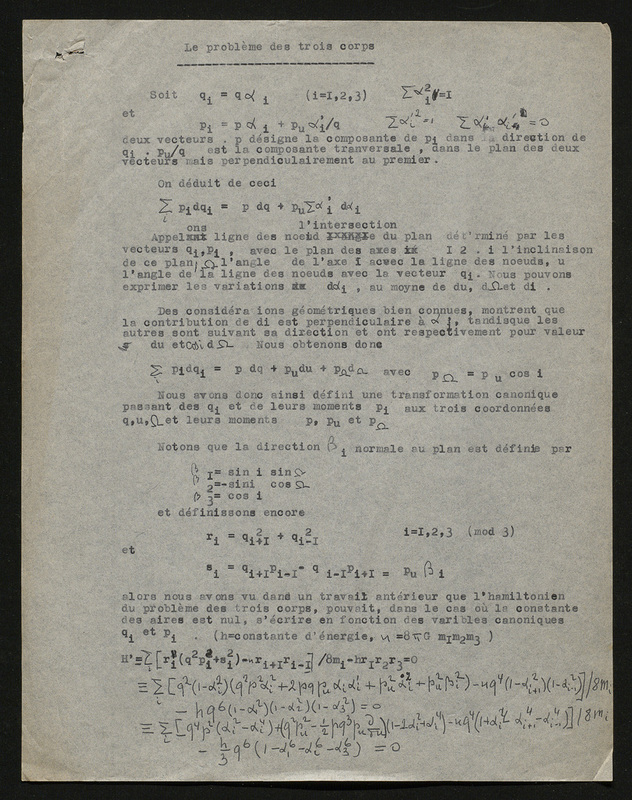 This document goes back to 1961. Here we find calculations on the Three Body Problem.

The three body problem is another field Lemaître greatly invested in after the war. It consisted in trying to determine the trajectories of the orbits of three point masses interacting according to the laws of gravity. The problem is quite complex and assiduously studied by astronomers and physicists alike. Unlike the two body problem, which studies the interaction of two point masses (the Earth revolving around the Sun), the three body problem is not integrable in practice ; there exists no analytical mathematical formula that can be established expressing the form of the orbits in this problem. This is due to the fact that the interactions between three bodies comprise singularities. The behaviour of the bodies is very strongly linked to their characteristics (mass, size, speed, etc) and to their position in space, which makes determining their trajectories in the long run impossible. Moreover, two of the three bodies may collide.

Like many scientists, Lemaître focussed on the question to the point of finding an original regularization technique. He applied symmetrical coordinates to the problem (by considering the three bodies' masses as equal), which removed the singularities of the problem in that particular case. His masterful contribution in this field was made possible by all the tools placed at his disposal. Those machines allowed Lemaître to propose and calculate a new regularization for this celebrated problem in celestial mechanics. 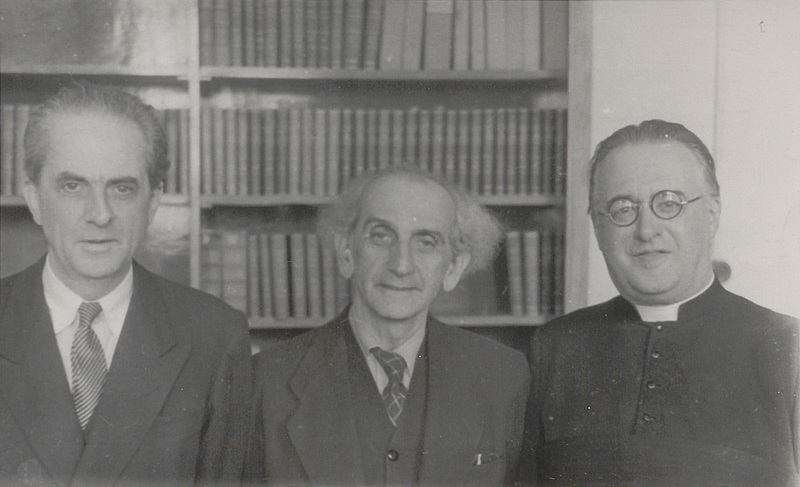 In March 1959, Georges Lemaître and his friend and colleague Professor Charles Manneback greet the celebrated mathematician Cornelius Lanczos (centre) at the Digital Research Laboratory. The Hungarian scientist came to the Digital Computing Laboratory and much admired its machines.

← Calculating machines…
Machines as research tools →
Georges Lemaître and digital calculation: an interest in expansion…
… and his research work